Have you ever wondered if the thermostat that controls your oven’s temperature is off?  Wouldn’t it be nice to know?  Cooking at the wrong temperature is obviously counterproductive.  Results can range from radically over or undercooked food to being slightly off by a few degrees which can still affect  texture and flavor.  What follows is an easy way to prove your oven’s controls are accurate using a FireBoard 2.

Testing an oven’s accuracy with a FireBoard.

Naturally accurate temperatures will yield the cook making the dish exactly what the recipe’s creator had intended…and if you are authoring your own recipe, you want to make sure that your instructions are spot on for reproducible results.

You will need an accurate, trusted, calibrated thermometer.  If you are going through with this test, you will want to use an accurate thermometer like a FireBoard 2 or Spark.  For example, the Spark has a NIST traceable calibration certificate.   View our post about FireBoard’s commitment to accuracy and how they follow this standard. 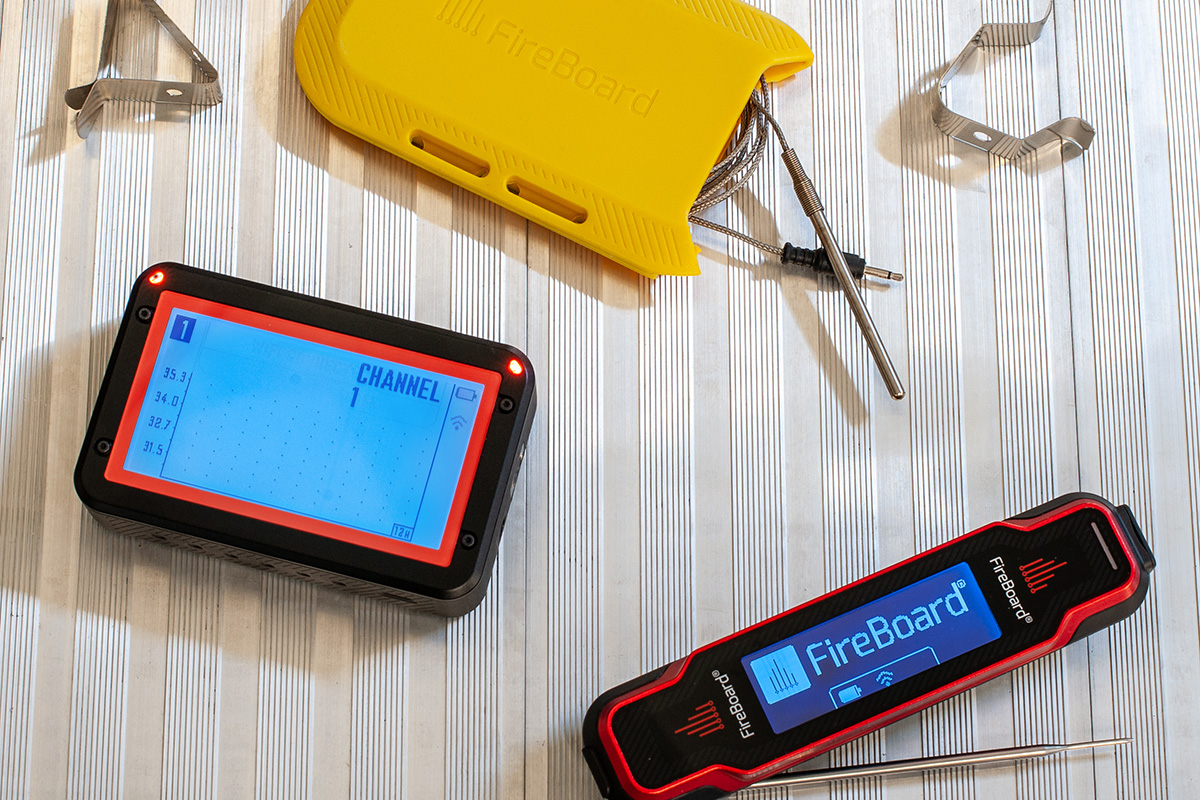 To test the temperature accuracy of your oven you will need a FireBoard or Spark, ambient temperature probe and a pot clip or rack clip to keep the probe measuring the air, not the metal inside the oven.

Probe placement will have a significant effect.   Place the probe in the center of the oven space ensuring that the probe is not touching racks or the walls of the inside of the oven.  This could result in an incorrect reading.  Try to pick a spot that can easily located for future testing.  For this test a FireBoard pot clip was used to suspend the ambient probe from the center rack. 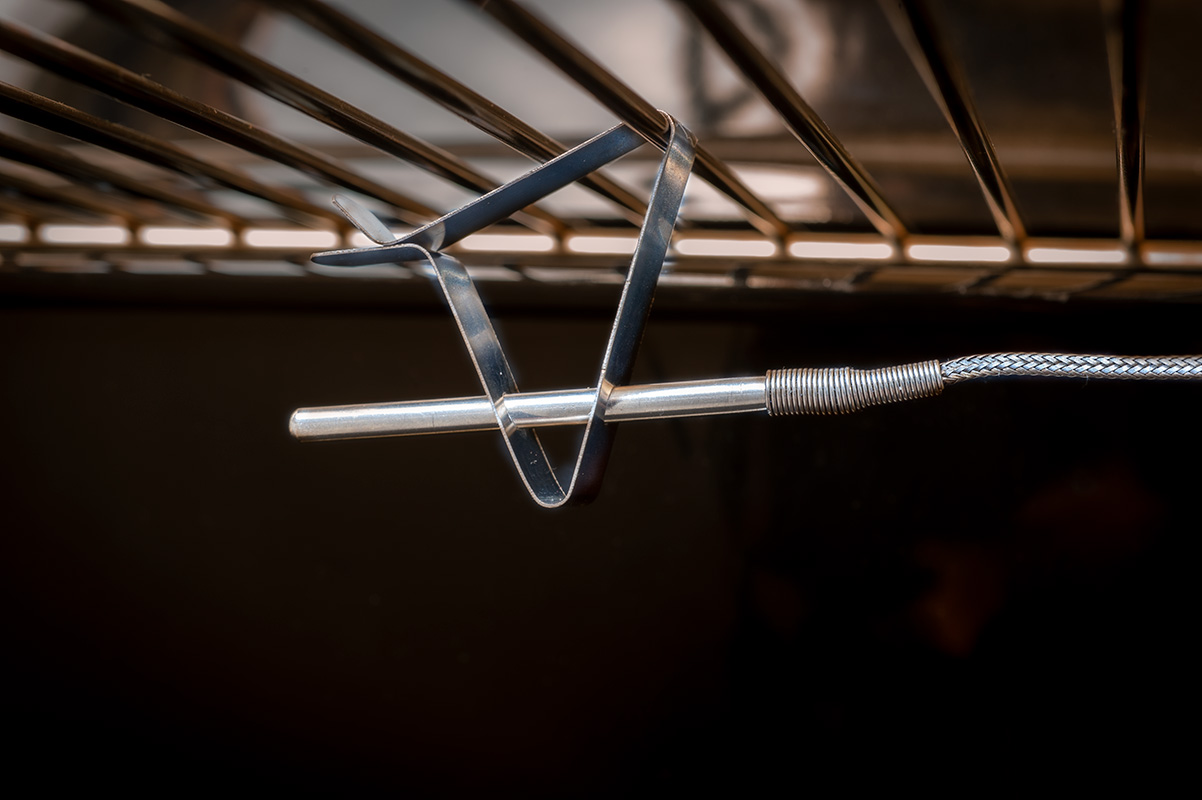 The standard grill grate clip did not fit the test oven’s rack, however the pot clip worked out nicely.   This versatile FireBoard accessory assists in rigging probes to take measurements without interference from nearby objects.

With convection off, readings were taken 60 minutes past the time the ovennachieved the set temperature.  This resulted in modest but consistent temperature fluctuations.   A sine wave can be observed of the three test temperatures in the session chart in the FireBoard app. This proves that the oven tested was cycling in an appropriate manner.  When the set temperature is reached the heating element turns off until it the temperature dips down a bit and then the oven kicks the heat on again. 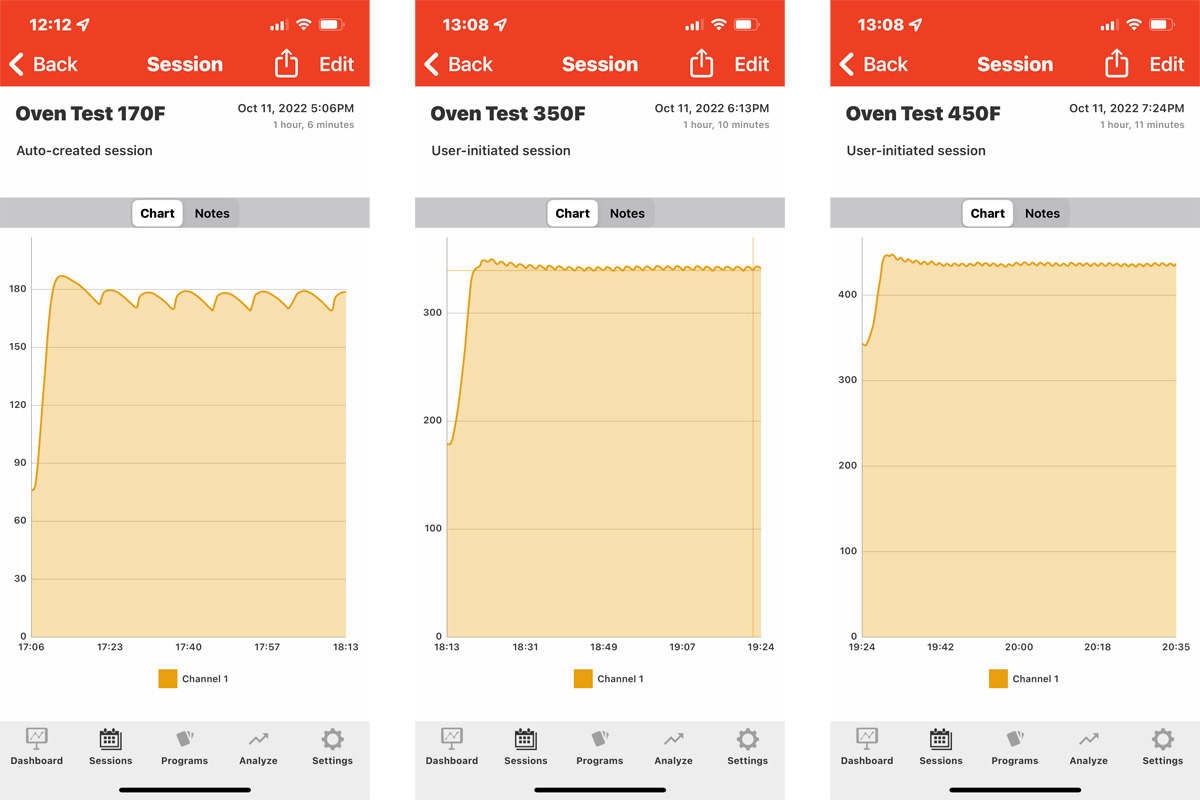 Temperatures were close, but deviations were found at all three temperatures.  The lowest temperature setting of the oven, 170ºF, yielded an average of 175.6ºF.  While the oven’s setting of 350ºF averaged a slightly lower reading of 341.8ºF and with some similarity 450ºF averaged 435.9ºF 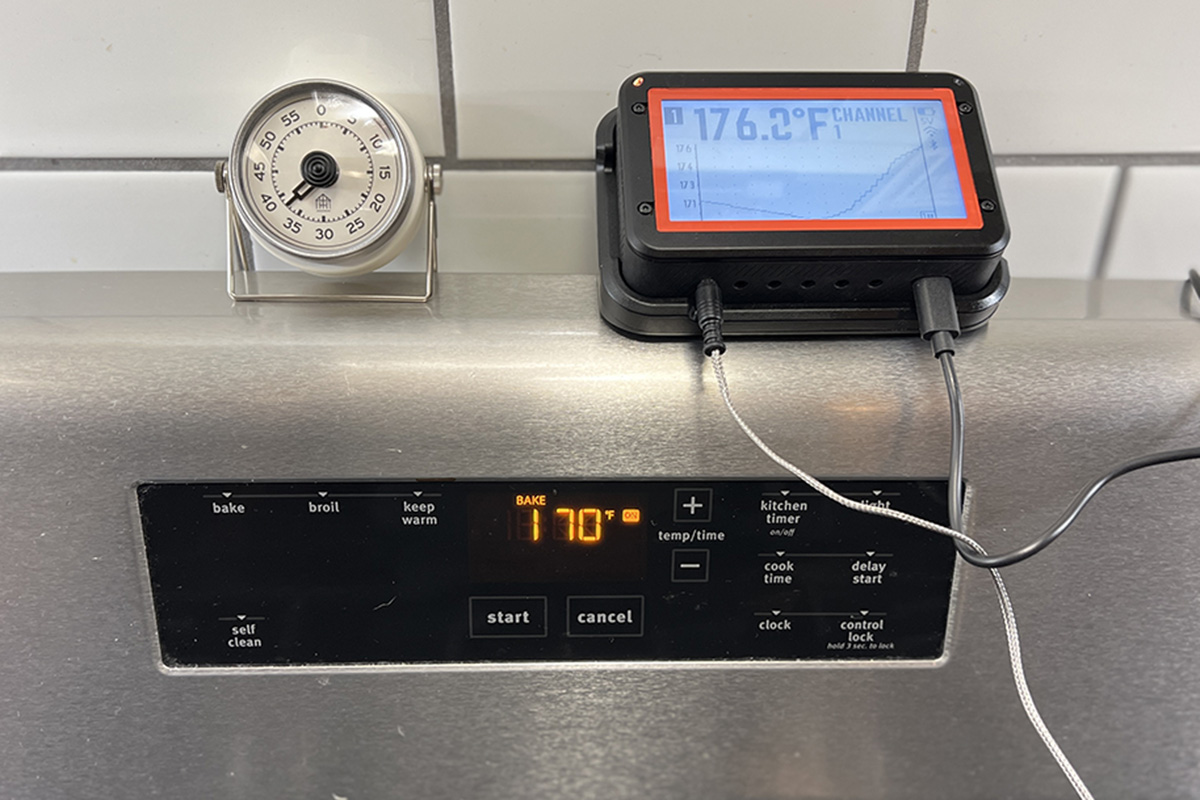 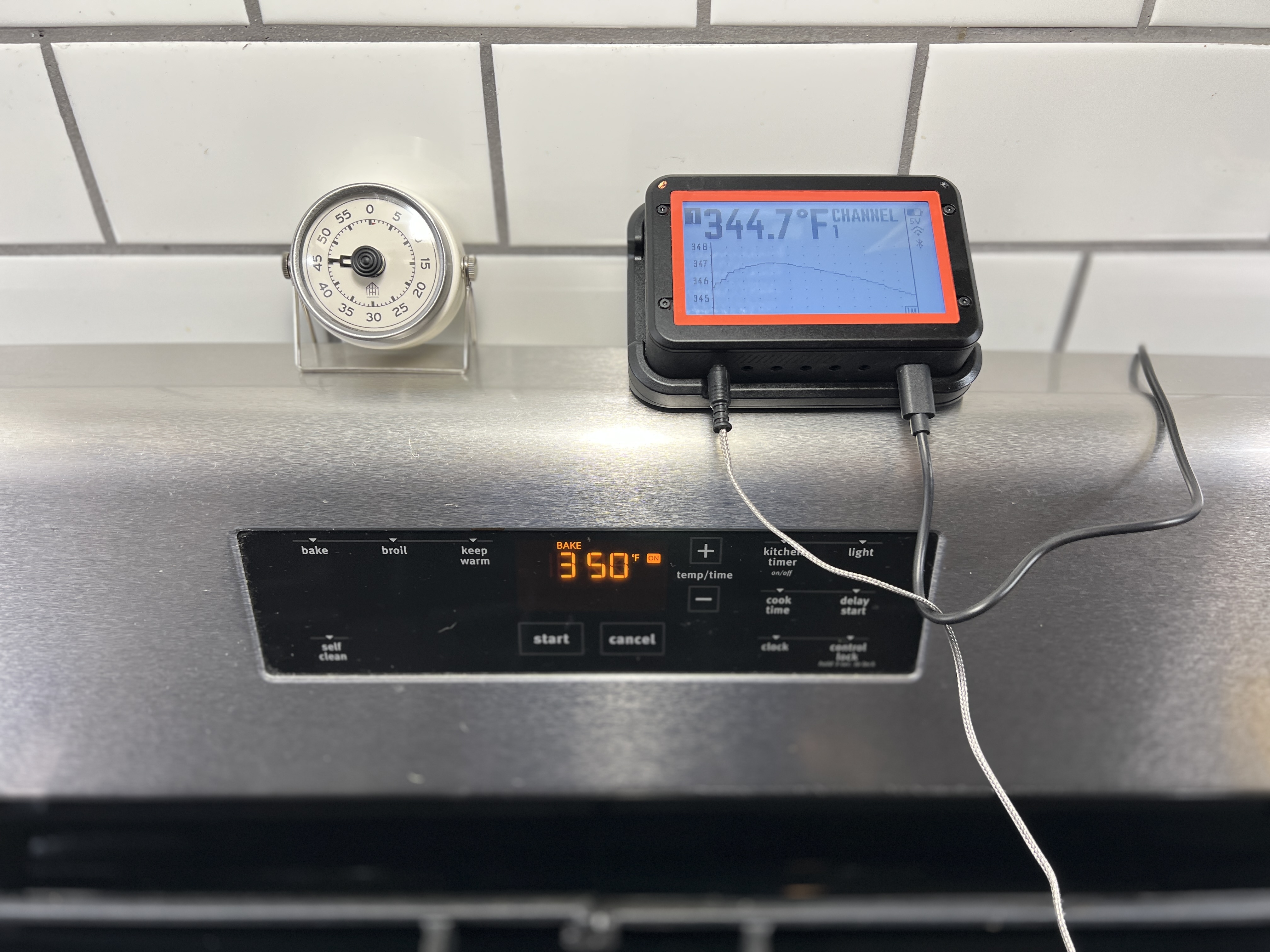 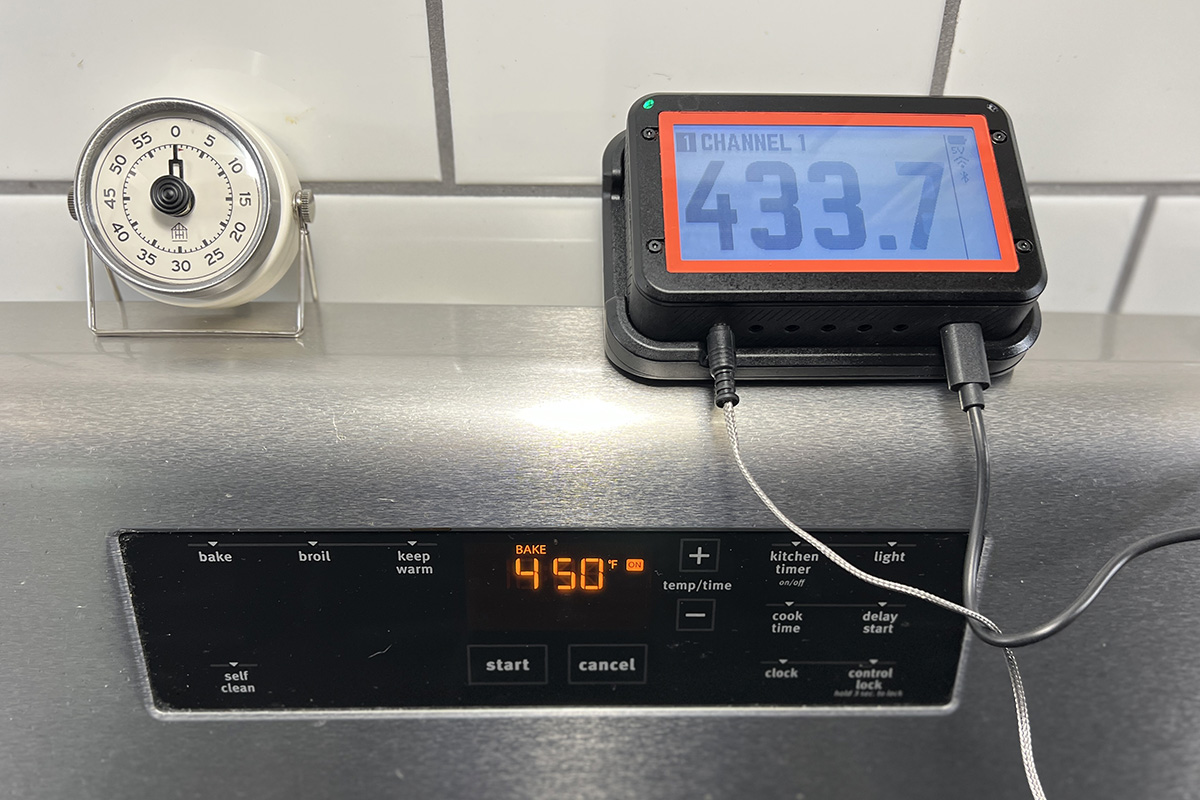 Our test results yielded a non-linear delta.  Meaning that all three temperature differences were not the same amount over or under the oven’s set temperature.  If the test results yielded a consistent difference, this could be an easy fix, as ovens, such as the Maytag tested here can be calibrated by the end user. (i.e. the oven is displaying 20 degrees warmer than actual measured temperature, you would off set this by adding 20 degrees of offset).  These adjustments will vary by manufacturer.

Putting this information into action, I have been using these adjusted temp settings and have enjoyed the results.   My favorite frozen pizza, that  I baked at 456ºF instead of the the 450ºF on the box has never tasted better!   I plan to log more differences, testing my commonly temp settings to build a compensation  “cheat sheet”.  Stay Tuned!

Smoking a Turkey with a Kamado and FireBoard
Next
FireBoard HQ Update: Plumbing, Electrical and HVAC! 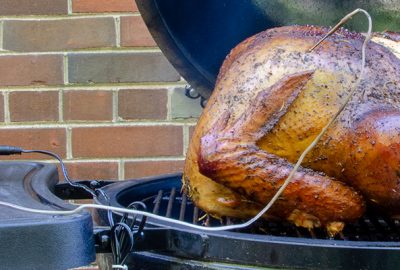 Smoking a Turkey with a Kamado and FireBoard

Thawing Safety If you were not able to get a turkey from your local butcher shop, you will need to properly thaw your frozen turkey. … 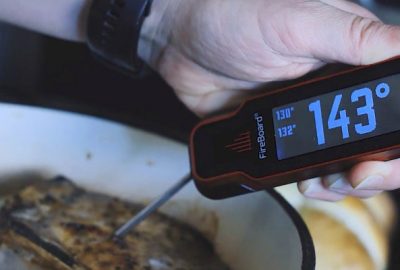 How a professional chef uses a Spark at home

“The cobbler’s child is always the worst shod.” Nothing could be more true for those working in food service.  After spending extensive hours working in… 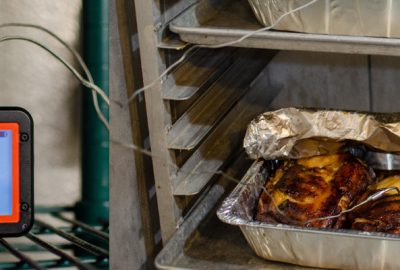 How a FireBoard can simplify HACCP programs

What is HACCP and why do we need it? For those not familiar with the term HACCP, simply put it is a set of guidelines… 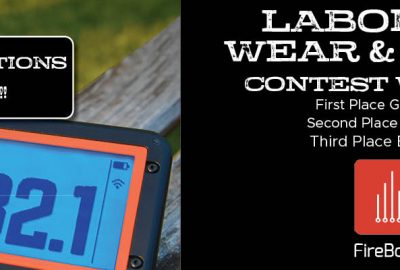 We got to see so many great looking sessions from the participants of our Labor Day Wear and Share Contest.  After great consideration, we are… 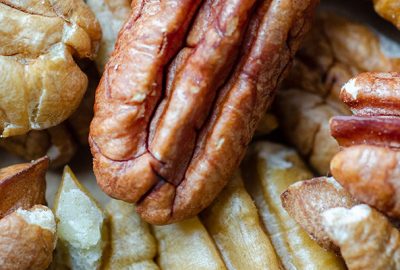 Toasting Pecans with a Yoder YS640S

Roasting or toasting nuts with a smoker may not be at the top of your list, but once you discover how easy it is, you…